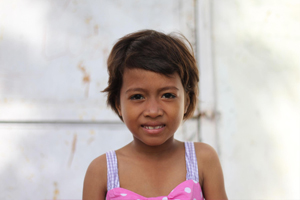 When Fien Wutun and Theo Vermeulen first visited Sumba more than 10 years ago, they were overwhelmed with the poverty and need for help. Together they decided to set up a children's home and they called it Hammu Pangia, which means 'happy and safe home' in bahasa Indonesia.

More children needed help and so they moved twice into a bigger home, simply to give more children a place to live. Three years ago they were able to move into the current location - a great house, with enough living space for the children as well as close to the schools and the main city of the island.

Sumba is one of the poorest Islands of Indonesia. It is almost twice as big as Bali and has more than 650.000 residents. It's primarily a Christian island, but a lot of people still practice the local traditional religion. Only a handful of people speak English, most speak the local Sumbanese language or Indonesian Bahasa.

Most people live of agriculture. Quite regular the island has to cope with drought, which means a bad harvest. As a consequence malnutrition can be found everywhere. Medical conditions are poor.